Zorge Europe B.V. has taken over HOFFMANN as a result of the strategic partnership established in 2016. Now the sole owner respectively shareholder is Mr. Dino Zorge.

Beginning in the smallest cellar rooms in Kirchheim, today the family business has developed into a modern, globally active, medium-sized production company. The constant success and permanent growth can also be attributed to the specialization in high precision elastomer micro parts in 2K or 3K composite.

To ensure the continuity of the company also in the future the two shareholders, Dr. Andreas Hoffmann and Jochen Kugler, have planned their succession, due to reasons of age, for a long time and passed on the Hoffmann GmbH located in Kirchheim/Teck to the family entrepreneur Dino Zorge officially on September 21st, 2021 (more about ZORGE in the third generation can be found under www.zorge.com). 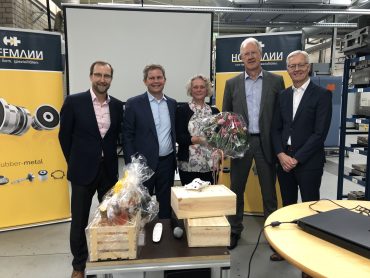 Just the company-wide collaboration over the past five years has shown from which synergies and positive effects also our customers benefit, and which additional potentials will be generated together in the background of progressing globalization.

Thus, the company group with its 180 employees at the production sites in Germany (composite parts), the Netherlands (LSR silicone parts) and Hungary (moulded rubber parts) and a forecast annual turnover of 21 million euros is on a very solid foundation.

In doing so, the individual strengths of the sole enterprises are retained and the customer benefits are bundled and further expanded under a common ZORGE umbrella. All three production locations continue to operate independently under the existing company names. The new management of the Hoffmann GmbH is composed of Dino Zorge (CEO), Jochen Kugler (CCO) and Andreas Neumann (COO).

Since the end of last year, Mr. Neumann already has taken over the tasks from Dr. Hoffmann who still supports the company as an advisor. In addition, Mrs. Ute Schmidt, as sales manager with power of attorney, has taken up the sales function during the last two years of Mr. Kugler, who will retire next year. As long-term employees, Mr. Neumann and Mrs. Schmidt stand for stability, growth and guarantee continuity.